Today’s blog submission’s title & reasoning’s came to me whilst I was in a conversation with two of my fellow online writing friends. We were busily chatting back & fourth about this and that when a question provoking a thought was offered up… “What word or descriptive name have you been named by, by others?”

What Is The Meaning Of Crone?

The dictionary definition of the word of chrone is “an ugly old woman, hag or witch” – For a long time, to be called a crone was an insult. The very word implied a wrinkled, hunchbacked old woman, unwanted and unloved. Women who had reached an advanced age were dismissed as useless hags. Into today’s modern age and era being called a crone is a term of endearment.

A Crone may be a woman of any colour, race, religion, sexual orientation, economic status, educational level, lifestyle, or political persuasion. She may be disabled or abled, introvert or extrovert, single, married, widowed, or partnered. She is like you and me. What does set the Crone apart, however, is her willingness to tell the truth about her life.

Being called  a crone todays is a respectful word that means a woman has through her years has gained much wisdom from all that she has seen learned and had bestowed upon her. Today, the most common definition of a Crone is a “wise old woman.” Thus, a Crone is a woman who has moved past mid-life and who acknowledges her survivorship, embraces her age, learns from the examined experience of her life, and, most likely, appreciates the wrinkles on her face. Crone women refuse to be put down. They do not walk meekly on the road to old age. They are keen to assert their presence if not their influence.

A Crone is an older woman who has learned to walk in her own truth, in her own way, having gained her strength by acknowledging the power, wisdom compassion, transformation, healing laughter, and bawdiness that grows and burns within her… having a life that is made up of the totality of her experiences. She is “a wise old woman.

The word Crone is derived from the old word for crown, suggesting the wisdom that emanates from the head like a halo. Her own child baring days are past; she is the wisdom keeper, seer and healer and midwife, whose knowledge is sought out to guide others during life’s hardships and transitions. (Reference – https://www.goddess-guide.com/crone.html).

The concept of crone existed tens of thousands of years ago, when women’s life patterns were broken up into in three stages — Maiden, Mother, and Crone. The Maiden was the youthful, independent woman. The Mother was a woman who guided others, as a biological mother or as a teacher. The Crone was the postmenopausal woman who enjoyed a special, revered status. This elder woman was viewed as a fount of wisdom, law, healing skills, and moral leadership; her presence and leadership were treasured at every significant tribal ceremony and each personal occasion from birth to death. (Reference – https://www.cronescounsel.org/who-is-crone. Note:  in recent years some women’s groups have added “matriarch” as the third stage before Crone.  The Matriarch was the head of a family or tribe.

Crones, hags, and witches frequently were leaders, midwives and healers in their communities. The meanings of these three words, however, were distorted and eventually reversed during the 300 years of the Inquisition when the male-dominated church wanted to eliminate women holding positions of power. Women identified as witches, who were often older women, i.e. crones and hags, were tortured and burned, and the words witch, crone, and hag took on the negative connotations. (Reference – https://www.cronescounsel.org/the-ancient-crone).

I have indeed heard the word or the term “crone” prior to Maggie telling myself and Lauren today that her friends are known for relating her to and identifying her as a crone… but I do openly admit that my understanding of the word “crone” was still in the dark ages of when wise women and the word crone itself was directly linked to witch craft. There is something about me that has me in between stages of all the three stages of my own life’s patterns… I am busy writing each chapter of my life in a learning and wise manner; whilst living in awareness that I am planting the responsibilities and learning of each of my 3 stages of my crone’s life cycle into those who walk my well trodden path “learning from each chapter/stage & writing my life/learnings wisely.”

I am on one hand a Maiden –  A youthful soul at heart who can still related and hold my own in my younger peer groups, I was very much a fiercely independent woman so many years ago but I have learned that marriage and family relationship had a need for me to become independent in helping my family grow but not be independent in the sense of going through my life alone as a single person…

choosing to liv my life within and for the good of my family.. I guide my family with love and support towards their life’s path.. with arms full of skills and teachings… that will help them in developing their own life’s meanings and pathways.

Then there is a small part of me that is starting to grown into my crone role… I am still a fledgling or a crone in training… I am not postmenopausal but there is a big part of me that
has experienced much throughout my 42 years of life. The roads that have led me through turbulent and cross winded paths have led me to becoming far wiser at times then my years have carried me.

As a counsellor I have learned the skills of giving advice and sitting in a silent stance whilst listening and guiding others to their own self actualised beings. I may not be old in terms of age, but my experiences and knowledge have given me skills of  wisdom, law, healing skills, and moral leadership; her presence and leadership… so whether I am a crone before my 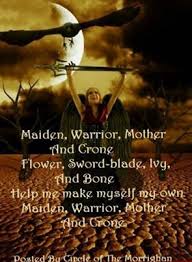 time or I am a fledgling or a crone in training, my skills are indeed already instilled in me and I am ready for the years that will follow me on from my Motherly stages of my life cycle… I do call this stage that I am in “the fledgling stage” because I feel that I have tendencies and characteristics of all my 3 life cycle stages… I am not ready to stop being the youthful maiden who has the ability to fit in with the younger youth & I am certainly not through my Mothering years either… whilst my children may need me less and less as the years go by… I know that a Mother’s duty has no end… I am not a full fledge crone as I do not as yet have all the characteristics of a fully encircled crone… For me as long as I am here I might as well be content in playing a role in of my life’s 3 cycles… or unfortunately I would cease to be any of the 3 stages of my life cycle altogether.

I am not yet an older woman of age but my continued presence in my world and in the world of others has my many skills and learnings showing in and throughout my years of learning and growing in my life’s role where I gained the skills and abilities that wisdom, laws/morals, healing abilities and leadership can bring. My life is busy passing through my days and years… slowly growing my stars and stripes that will eventually turn my comforting and softly covered downy feathers into the unmoveable foundations of my youth & my life’s experiences.

I still a nestling maiden who has fledglings neatly tucked into my downy feathers, they not being yet fully grown but they are more than capable of taking flights of trust on their own.. I am in hurry for their soft down to turn into the years where they take on their own life’s roles, they will be someday soon be ready to spread their wings…. but today is just not that day; just as I wont ever be ready to become my croning self… but time and stage of my life will come without any awareness that it has arrived.

I do however look forward to the years where I am held in esteem for the skills , the abilities the wisdom, the laws/morals, the healing abilities, the knowledge, the teachings and the leadership that I have had a hand in instilling into others… Someday soon I know I will no longer be known for being wise beyond my years.

I appreciate you both immensely for the lessons and the knowledge of your years that you both share and pass onto me, you are both very worthy of the dedication that I have written here… “Croning Sista Scripta’s.”

up the “Triple Goddess or 3 Stages Of Life” – they being The maiden, The Mother, & The
Crone…. each of all have a role I am the Maiden for I am still parenting and nesting… Lauren is the Mother – she has the teacher role and has much wisdom and teachings to share, she isn’t at this very moment ready to hang up her teachers hat… but retirement is the cross road that she  will soon be standing in the centre of & Maggie is the crone – A because her friends have told her that she takes on the wisdom role, they go to her and seek direction and advice… she also has entered retirement & is building a life for her in her own right —-“